Solomon Kane and the Specter of Modernity 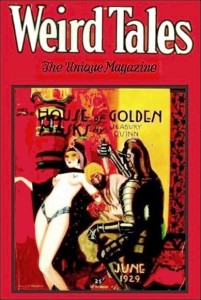 June 1929 saw the publication of the third Solomon Kane story, this one more of a flash fiction piece of the sort Fredric Brown would become famous for.

If you’re reading Robert E. Howard stories specifically to beef up your D&D game, this one is the sort that could be used with practically no changes at all. Everyone has a bandit of Gaston the Butcher’s sort that has gotten away from the players at one time or another. The Inn of the Cleft Skull can be placed in just about any forested area on your campaign map. All characters encountered by Solomon Kane in this story are in great need of killing, so they will fit seamlessly into any old school D&D session.

One thing stands out about the Solomon Kane stories in contrast to H. P. Lovecraft’s and even A. Merritt’s horror tales. Having an explicitly Christian hero from a wilder time, there is no need for the sort of skeptical protagonist that holds out for the shred of a chance that he’s really just seeing something that appears supernatural and which (in his mind) no doubt has a perfectly naturalistic explanation.

Like Lord Dunsany, Howard had the capacity and the desire to write stories where the specter of modernity was is not accommodated even in passing. It makes for intrinsically better storytelling— particularly when dealing with the sort of collision between fantasy and horror elements you have here.