AD&D Session 2: The Thing in the Sewers

The party this time was much tougher– a fighter, a paladin, and then a magic-user with charm person, hold portal, message, and read magic in his spell book. These new characters had just awakened from horrible nightmares as they saw in their minds eye a group of hapless adventurers torn apart by horrible demonic entities.

Back in town, the party arrives at the table and sees Zanzel Melancthones face-palm in despair as he puts away one shot after another. On the other side of the tavern a roguish gentleman wins a game of craps as another man complains bitterly that he must be cheating somehow. The players go investigate the dice and they seem to be fair. They don’t start anything. The rogue greedily collects his winnings while a cheap trollop brings another round of drinks to his table.

They talk to Zanzel and he complains about how hard it is to find good help these days. Two parties had failed to come back just this month! At this rate there’ll soon be no adventurers left at all, and then who would go on quests for him? Terrible! The party asks about how the other group died and he says they went down into the sewers and never came back. Meanwhile, a brazen strumpet was disemboweled right in the city streets just last Tuesday. People are staying home in fear now, they’re spending less, businesses are doing poorly– if this keeps on, this is going to be hell on his stock portfolio. If only there was someone to help him!

The players volunteer their services and he offers them 100 gp apiece to take care of this mess. He calls over two purple sash wearing extras from the city watch to help pad out the party: Gilbert and Sullivan. The players sally forth. They head down Electrum Street, turn left on Slum Avenue, take a right on Jewel Lane, and then head straight into Harlot Central. They find a round metal plate about two feet in diameter and maybe an inch thick that they pry up. The climb down a ladder and head into the sewer.

Inside about half a block north they find some loose bricks in the wall. They one out and drop it on the dry edge of the sewer tunnel. It makes a loud, booming, resonating sound. They take more of the bricks out and head down a tunnel. They come to a round room 30′ in diameter. To the north is an east-west passage. They go east and find the remains of several people. The number of bodies matches up with the missing adventuring party minus one.

The players go back to the round room and decide to wait for the monster to come back to its den. Before long they hear the booming sound of a brick falling to the ground. Then another and another. The paladin leads the way back down the passage to the entrance to the side tunnel and there is a foul thing leering at them through the hole in the bricks. When the paladin gets up into its face it recoils in horror and attempts to flee. The party takes advantage of their free combat throws to wail away at it, but their weapons glance off it uselessly. Even flaming oil seems to have no effect. The players chase the thing through the sewers until they realize they won’t catch it. Then turn back when they hear howling sounds. 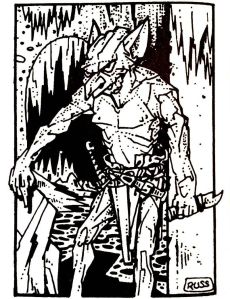 They go back to Zanzel to report in and he is glad to help out. He tells them he has extremely competitive rates for his sage advice and that it’s nothing between him and them. He kindly offers to deduct the fees from what he pays them later. The players ask if they can rent some kind of magic weapon and his eyes light up. As he starts to break down various high interest loan programs he could connect them to, the fighter suggests that his paladin friend check in with the local church to see if they can help out. They go to the cathedral and the priest there explains that he’d get in a tremendous amount of trouble with the hierarchy if anything went wrong. The paladin pleads with him, though, so he goes and retrieves a sword that belonged to St. Thomas and begs him to bring it right back.

The party heads back to the sewers and goes back to the monster den and… [DM rolls dice, looks shocked] it turns out to be right there! The paladin leads the way scoring a couple of quick hits. Then he misses a couple of times and takes enough damage to be nearly dead. Then the players have the idea of passing the sword around through the group. The fighter takes a turn until he is knocked down to one hit point. Then Gilbert takes a turn. Then Sullivan… who gets knocked unconscious. The party debates a moment, then realizes that the paladin really can “lay hands on himself.” He goes back to the breach once more, noticing that the creature has largely healed up from his earlier wounds. Somehow he scores two more hits and the thing is killed even though for many turns victory seemed almost impossible.

The party collected their wounded and made haste for the exit without bothering to search the room. In the sewer tunnels, they heard howls coming from the north and threw flaming oil at the monsters. The splash damage lit their fur on fire and they stop dropped and rolled, giving the players enough time to make their escape.

The players escaped the dungeon with 66 experience points to split five ways. That’s 11 each!

Very difficult to run this game without lapsing into what’s essentially “Basic D&D… but with AD&D monsters, magic, and classes.” Not real clear on how the paladin’s protection from evil should work, either. Not too worried about it, though. We’ll sort it out if he lives long enough!

One response to “AD&D Session 2: The Thing in the Sewers”