The year was 1980 and Steve Jackson’s first complete role-playing game design hit the market. A pivotal time in gaming to be sure!

Sign of the times: there are no amateurish drawings of naked women in the pages of this module. But take heart! This game nevertheless has its foot firmly planted in the staggeringly awesome days of gaming’s primordial past. A scantily clad Amazon chick not only appears on the cover but also as an explicit option for unironic play:

If you shelled out big bucks for the recent monster-sized Kickstarter edition of this game, don’t bother to look for this. This was evidently expurgated for being way too spicy for the high strung pearl-clutching gamers of today. (Fortunately for us pulp fantasy fans, Tarzan remains in the archetype list for the Woodsman “class”– though the name was character type was updated to “Ranger”.)

One surprising bit that was left 100% intact, however, is this choice bit from the game’s background setting of Cidri:

This enormous polyglot world was chosen as a background for two very good and totally opposite reasons. The first is variety. Cidri is big enough to hold thousands of Earths; it has room for the world of every Game Master who’ll ever put pencil to hex-paper. There’s room here for every sort of fantasy adventure to coexist — in a logical manner. And it provides a workable rationale for the weird melange of legend, historical fact, prehistory, science fiction, and sheer wild imagination that characterizes the work of the best fantasy gamers.

What an astonishing line there!

Granted, anyone that is familiar with role-playing games of the 1970’s could see why Steve Jackson would say such a thing. And Cidri is truly a bizarre game setting. It’s like Philip José Farmer’s World of Tiers series mashed up with Roger Zelazny’s Chronicles of Amber. It’s like a weird inversion of the default setting of the much later Steve Jackon  release of GURPS Fourth Edition– instead of “Infinite Worlds” it’s Infinite World!

Rough sketch for the cover of the Melee MicroGame? A stray illustration from the 1980 edition of In the Labyrinth? No on both counts! It’s a picture of Dejah Thoris by Frank Frazetta!

But look at that sentence again. It is very much like how I have (on many occasions) attempted to describe the best work of A. Merritt, H. P. Lovecraft, Robert E. Howard, and Leigh Brackett to a generation that is almost entirely unfamiliar with the pulp era. And here Steve Jackson in 1980 casually declares the work of the best fantasy gamers to be JUST LIKE THAT. He had no idea that there was about to be a sea change in how people even conceived fantasy to even work!

But wait, there’s more treasures to unearth in this old game!

In Steve Perrin’s review of it from the April/May 1980 issue of Different Worlds, he says this: “Perhaps the best part of the book is a column by publisher Howard Thompson, describing the story-telling requirements of being a GM. Truer words were never spoken.” Story-telling? Sounds potentially heretical to me! Too bad purchasers of the new edition will not have the benefit of this awesomely TRUE gaming wisdom from the dawn of the hobby. Steve Jackson deleted it for some reason!

But don’t worry. I have the text right here:

Most of you will eventually want to design your own labyrinths and take a turn at being Game Master. A fantasy role playing game is certainly more enjoyable when you can provide fun and adventure for your friends. In our experience, there is one philosophy of game-mastering that consistently leads to success. That is this: A GM is a solo entertainer of an unusual new variety. He is a writer, performer, and group facilitator rolled into one. Players participate in an adventure campaign for entertainment — not to let the GM be a petty god and manipulate their characters at will. It takes practice, attention, and sensitivity to lead a group through an adventure and leave them feeling good (win or lose) when it’s over. Thinking of yourself as a semi-professional entertainer like a bard or other
small-group yarn-spinner will help.

Don’t try to control the action or predetermine specific outcomes for everything. Your labyrinth and its supporting environment must be flexible enough to evolve as a result of the players’ actions, be they successes or failures. There must be room for players to build, destroy, live and die as they choose. This doesn’t mean that things should be easy. Player characters will get killed — fairly regularly, for the careless or headstrong. As a GM, you must be firm – but not so attached to your creation that it doesn’t also become something of the players’.

You needn’t bully your players or allow them to intimidate you. There will be points of disagreement during play, of course – but the best way to handle them is to postpone any
real discussion until a “critique” period after the game session. Players should feel free to ask questions or make comments about the GM’s actions, but it shouldn’t go farther than a few brief comments while play is going on. If you goof, and a player catches it immediately, you ought to fix it then and there IF you can do it without breaking the “feel” of the adventure. The ability to do this is a mark of the experienced GM. Real disagreements should always be discussed AFTER an adventure, in preparation for the next. You can stand by your actions and refuse to discuss them — but to the detriment of your campaign.

Remember – you are an entertainer. The adventure unfolding is your “act.” Nurture the story, let it build, involve players in the action. Within the framework you’ve constructed, let events happen as they will. What you and your players will create is a spontaneous experience that can be a rewarding entertainment “high.”

This is solid, straight ahead advice. If all you had were a bunch of fantasy game materials from the seventies you’d probably hit on this eventually. The Hickman Revolution was a not even a glimmer in anyone’s eye at this point, of course. And Steve Jackson’s own particular brand of role-playing philosophy (which would fully flower in the mid-eighties with GURPS) was not yet in evidence in any of The Fantasy Trip’s material.

Of course the approach to role-playing that would become dominant in this century in the aftermath of TSR’s demise was even further off. Which is intriguing. One thing that sets The Fantasy Trip apart from original D&D that it has in common with D&D 3.5 is the hyper-regulated combat and movement system.

Here is Steve Jackson’s own rationale for why he developed it from his designer’s notes in The Space Gamer 29, July 1980:

It started in early 1977. I had just found out, much to my surprise, that I could design games… people were buying Ogre, But the game that I was playing a lot of myself was Dungeons & Dragons. And like everyone else who tried an early version of D&D, I wanted to make some changes. The polyhedral dice were irritating– but the biggest problem was combat. The D&D combat rules were confusing and unsatisfying. No tactics, no real movement– you just rolled dice and died. T&T was the same way. Monsters! Monsters! was more detailed in some ways, but still allowed no tactics. So I did something about it. 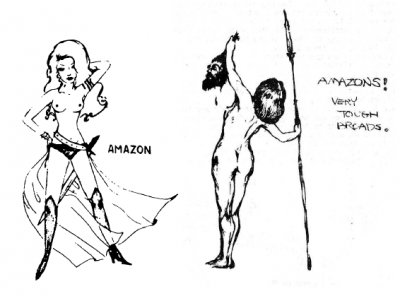 Amazons from the original edition of Dungeons & Dragons and 4th Edition Tunnels & Trolls. If your game doesn’t have them, it sucks!

Indeed he did. Steve Jackson would end up making two of the greatest microgames in history, which is pretty cool given that he’d already created the definitive microgame with his debut game design.

Steve Jackson is far from being the only person that could look at the first two role-playing games and declare the combat system to be completely broken. Of course at the time he wrote that, we were decades away from anyone being able to provide a cogent argument for why the nature of those early systems were a feature, not a bug. But given everything we’ve seen in five decades of role-playing at the tabletop, we have to ask. Is a hyper-regulated combat system intrinsically bad for rpgs? Is that the root cause that made D&D 3.5’s completely linear “everybody wins nobody dies” adventures the gaming travesty that it is…?

It’s a reasonable question, really. After all, the Melee/Wizard adventure “The Lost Lair” published in The Dungeoneer 11 in 1979 did not embody the design principles outlined in Jaquaying the Dungeon even though it was created by the person whose name would become synonymous with the idea.

The seeds of destruction really are there, perhaps. But given Howard Thompson’s spot on game mastering advice included in the original edition of In the Labyrinth, I have to say…. It doesn’t have to be that way!