Clerics, Demi-humans, and the Humanocentric Campaign 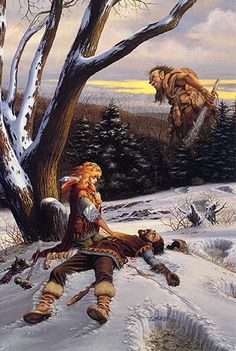 Complaints about the cleric class are par for the course with recent editions of D&D. Nobody wants to play them, presumably since changes in the game implemented as the game shifted away from the TSR editions. (Cleric trouble is not entirely a new thing, though: some people go so far as the remove the class from OD&D entirely.) Meanwhile demi-human level limits, race as class, and the mechanics of multi-classing have been hashed out endlessly over the years. There’s not really a consensus on these points beyond the fact that people can’t stop tinkering with them.

I think the underlying problem here are that the issues with Clerics and Demi-humans are linked– but they are generally considered in isolation of each other. This is another one of those instances where consulting Gary Gygax’s Dungeon Masters Guide is a good idea, so lets look at the section on “The Monster As Player Character” which I think speaks directly to this:

The game features humankind for a reason. It is the most logical basis in an illogical game. From a design aspect it provides the sound groundwork. From a standpoint of creating the campaign milieu it provides the most readily usable assumptions. From a participation approach it is the only method, for all players are, after all is said and done, human, and it allows them the role with which most are most desirous and capable of identifying with. From all views then it is enough fantasy to assume a swords & sorcery cosmos, with impossible professions and make-believe magic. To adventure amongst the weird is fantasy enough without becoming that too!

This stuff about people wanting to play outlandish character types…? Gygax is saying that they think they want that sort of thing. But they really don’t. I mean you can want to get into that sort of thing. But there are consequences. It might sound good… but you don’t actually want it. The essence of adventure is thrilling encounters with the weird. If your starting point is a ragtag group of weirdos… where exactly do you take that? There’s nowhere to go.

Consider also that each and every Dungeon Master worthy of that title is continually at work expanding his or her campaign milieu. The game is not merely a meaningless dungeon and an urban base around which is plopped the dreaded wilderness. Each of you must design a world, piece by piece, as if a jigsaw puzzle were being hand crafted, and each new section must fit perfectly the pattern of the other pieces. Faced with such a task all of us need all of the aid and assistance we can get. Without such help the sheer magnitude of the task would force most of us to throw up our hands in despair.

Gygaxian humanocentrism is, just as with “kitchen sink” fantasy, a premise that makes it that much easier for the novice Dungeon Master to develop their own game setting from scratch. And again, making your own is– just as with Traveller– something Gygax expects you to do if you’re at all serious about the game. Granted, TSR did not have any campaign settings to sell at the time. The slam here against the “meaningless dungeon” is telling, here. He’s shaming the people that have spent countless hours playing this game without doing all that much to develop a “serious” setting!

By having a basis to work from, and a well-developed body of work to draw upon, at least part of this task is handled for us. When history, folklore, myth, fable and fiction can be incorporated or used as reference for the campaign, the magnitude of the effort required is reduced by several degrees. Even actual sciences can be used – geography, chemistry, physics, and so forth. Alien viewpoints can be found, of course, but not in quantity (and often not in much quality either). Those works which do not feature mankind in a central role are uncommon. Those which do not deal with men at all are scarce indeed. To attempt to utilize any such bases as the central, let alone sole, theme for a campaign milieu is destined to be shallow, incomplete, and totally unsatisfying for all parties concerned unless the creator is a Renaissance Man and all-around universal genius with a decade or two to prepare the game and milieu. Even then, how can such an effort rival one which borrows from the talents of genius and imaginative thinking which come to us from literature?

Here’s another passage for the “Appendix N is just a list of Gygax’s personal favorites” crowd. The books really were central to his vision of the game. In fact, because he was so steeped in those books– and “history, folklore, myth, fable and fiction” as well– he had trouble imagining anything other than a humanocentric fantasy setting for the game. I mean after all, why would anyone repudiate all of those resources for building a game…?

Well… what if there were a generation that was (largely) unfamiliar with that stuff– a generation that had so much new fantasy available they had no need to read anything from before 1980 or anything much that was in direct conversation with the myth and folklore that pulp fantasy was built on…? That generation is going to look back at Gygax’s forcefulness with regard to humanocentrism and think the guy is just plain weird. I mean, if you were a fan of a dual-blade wielding drow elf fantasy superstar, that’d just be sense.

The problem with D&D is not that a generation of “not fantasy enough” gamers took it over during the eighties and later on. The problem is that it does not embrace a cosmology that supports the designer’s goals for the default milieu.

Appendix N, Old School D&D
← Old School and New School: Where Do You Draw The Line? A Real Big Mess →

36 responses to “Clerics, Demi-humans, and the Humanocentric Campaign”