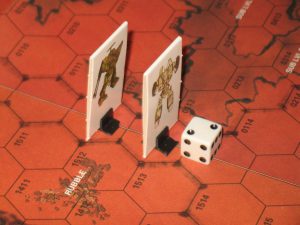 This game was nuts.

I was able to leverage some sweet spots to get some easy hits with the missiles. My opponent wasn’t going to accept those odds forever, so he opted to close. He got lucky with a PPC shot that hit my head early on and I went through the game expecting him two roll those box cars on the location roll one more time.

The game was brutal, though. Whoever got initiative had to think carefully about what range to select. Even without us going into the sinkholes on the map and no water or tree hexes, position really counted for a lot. When I’d wore down my opponent’s right leg, I went in close and kicked it in order to open the way to victory. When I ended up with a similar Achilles heel, I backed off.

We both ended up with damaged leg actuators and destroyed heat sinks. An engine hit early in the game really cramped my style– and a gyro hit at the end could well have been the end of me. But then I scored two large laser hits in my last chance for a win. One took out my opponent’s right leg. The other hit his head. Adjudicating the fall, he went backwards… onto his head.

It was an epic victory in a game session that had kept us in suspense for a solid couple of hours. Though I took some fall damage that turn two due to my banged up gyro. Nevertheless, I was able to limp off the battlefield….

Oh, and if you’re wondering about the weird pen drawings on the map…. We picked these map sheets up as a surprise bonus with our 1986 AeroTech. The flip side has somebody’s hombrew work on them. Whoever they were, they were really into this. Though they didn’t do much with their CityTech set: the ‘mech counters had been punched, but never played with! Our game tonight was the first time these Rifleman and Archer figures ever saw the table…! 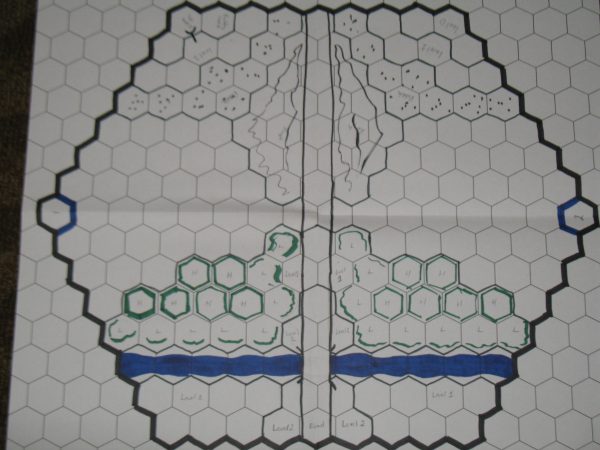