The Other Reason Conservatives Have Zero Cultural Power 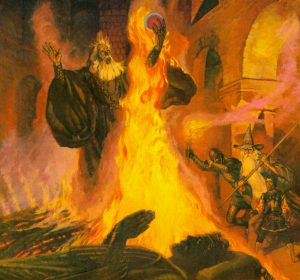 Yesterday I pointed out that the fact the idea that conservatives have zero cultural power is the product of pure narrative, and therefore a lie.

Conservatives could have actually thought about this for a moment and then said, “hey… Jeffro’s got a point. Our ideological enemies do want us to think we’re weak and unattractive. Maybe we shouldn’t abandon culture to the left because we really do have something to contend for in that space. And a much stronger hand than we ever imagined!”

But is that what happens…? Nope.

It’s not just that the Left has managed to push non-leftists out of every cultural platform in sight. But we also have a very vocal contingent of “conservatives” that are downright eager to mock, disqualify, and deride anyone attempting to push back against the Left’s cultural hegemony.

If you don’t believe me on this, I present to you exhibit A, a commenter going by the name of Groffin:

John Ronald Reuel Tolkien has been dead for four and a half decades, Edgar Rice Burroughs has been gone for nearly seven, and it’s been over eight since Howard Phillips Lovecraft and Robert Ervin Howard met their untimely demises. Their works survived the inept attempts at besmirchment of the resentful and creatively sterile subversives, but in response they have changed tract and co-opted the stories, made gross, irreverent, black-washed parodies of their work on the silver screen to present these men as the face of their cultural hegemony and progressive messages. Young people today are not reading LotR for Christian allegory or Tarzan for the ideal Man of Nature, they watch glitzy Hollywood “reimaginings” of them that is stripped of nuance and with a pro-diversity tagline slapped on. And for all your glorification of the insular and self-aggrandizing indie-literature circuit, you have no minds of comparable skill or prestige, and will not for years and years if ever.

People are reading Burroughs and Lovecraft and Howard. And they’re not just an antidote to Hollywood’s bastardizations. They are powerful inspirations. People read these authors and quit waiting around for someone else make culture for them and they go out and do it themselves.

Guys like Groffin? They’re waiting for the very people that instituted the dark age of the past forty years to hand out a prize to the guys that are challenging their supremacy. Here’s a clue, pal: revolutions don’t work that way!

A say this not as a black-pill but a reality check. A soil-bed for unconscious Conservative dreaming might still remain, but don’t stand on the graves of men long dead, point to their fully-converged and corporatized estates, and claim that Right-Wing art in the modern day is anything other than a cast-out desiccated sham. It reeks of delusion. For Hell’s pity, seriously hold up Jordan Peterson as an equal to those old greats!? The agnostic Canadian Libertarian whose singular political stance is resistance to constructed pronouns (side-stepping or acquiescing to Feminism and Multi-Culturalism whenever he can get away with it), whose “literary masterpiece” is an incredible shallow self-help book marketed to fatherless boys? If he’s the best we have, how can you unironically claim we haven’t hit rock bottom.

And now he goes the full Denethor. (Groffin, are you okay, man? You sound like you’re about to set yourself on fire!)

Really, it doesn’t matter who is in the vanguard upending the status quo, overturning the narrative, and taking back ground from the enemy. People like Groffin will be hanging back, leaving people that actually have convictions to fight their battles alone.

Congratulations, guy. You are the other reason why conservatives have zero cultural power. Yes, the mainstream conservative commentators of course get paid to prop up that lie. But guys like Groffin are much worse, though. They’ll police our cultural gulag for free.

43 responses to “The Other Reason Conservatives Have Zero Cultural Power”