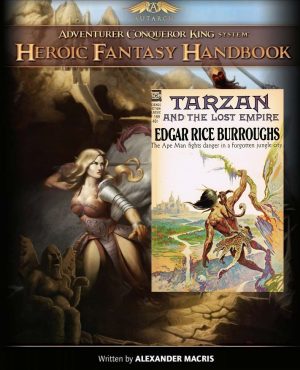 A lot of people have suggested that somebody make “Appendix N: The Game”. The thing is… it’s already been done. In fact, back in the seventies it was about all anyone could do. And sure enough, if you go back and look at everything from original D&D to AD&D, Tunnels & Trolls and Monsters Monsters!, all of it cribs a tremendous amount from the now forgotten fantasy and science fiction canon and takes for granted that the players will want to play characters types from books that nobody is familiar with today.

In the decades since the trend has been to move away from the literary roots of fantasy role-playing. Products like The Dungeon Crawl Classics RPG and Dwimmermount take the opposite tact. And now… with the Heroic Fantasy Handbook from Autarch, you can find out what the original tabletop role playing game could have been like if it had amped up the Weird Tales and toned down the B-moves and comic book elements.

What does that mean specifically…?

What you won’t see here is anything remotely “science fantasy” in the spirit of… well… about half of the entries that are on the Appendix N list, particularly Jack Vance, Michael Moorcock, Margaret St. Clair, L. Sprague de Camp, Lin Carter, Fred Saberhagen, and Sterling Lanier. (If you want that sort of thing, check out Barbarian Conquerors of Kanahu with takes a more pronounced John Carter of Mars type of approach!) In its place you’ll find something quite different than what most people clamoring for more Appendix N in gaming claim to want: a better treatment of the D&D elements that were cribbed from J. R. R. Tolkien’s works!

Face it, though. Gary Gygax had a lot of great qualities, but understanding Tolkien’s oeuvre was not one of them. Does the Heroic Fantasy Handbook’s more thoughtful handling of iconic characters like Eowyn, Luthien, Aragorn, and Bilbo clash with the other pulp fantasy elements provided here…? Well as far as I’m concerned, the more they clash, the better.

That’s exactly what I would expect to see in “Appendix N: The Game” anyway!

5 responses to “Appendix N: The Game”